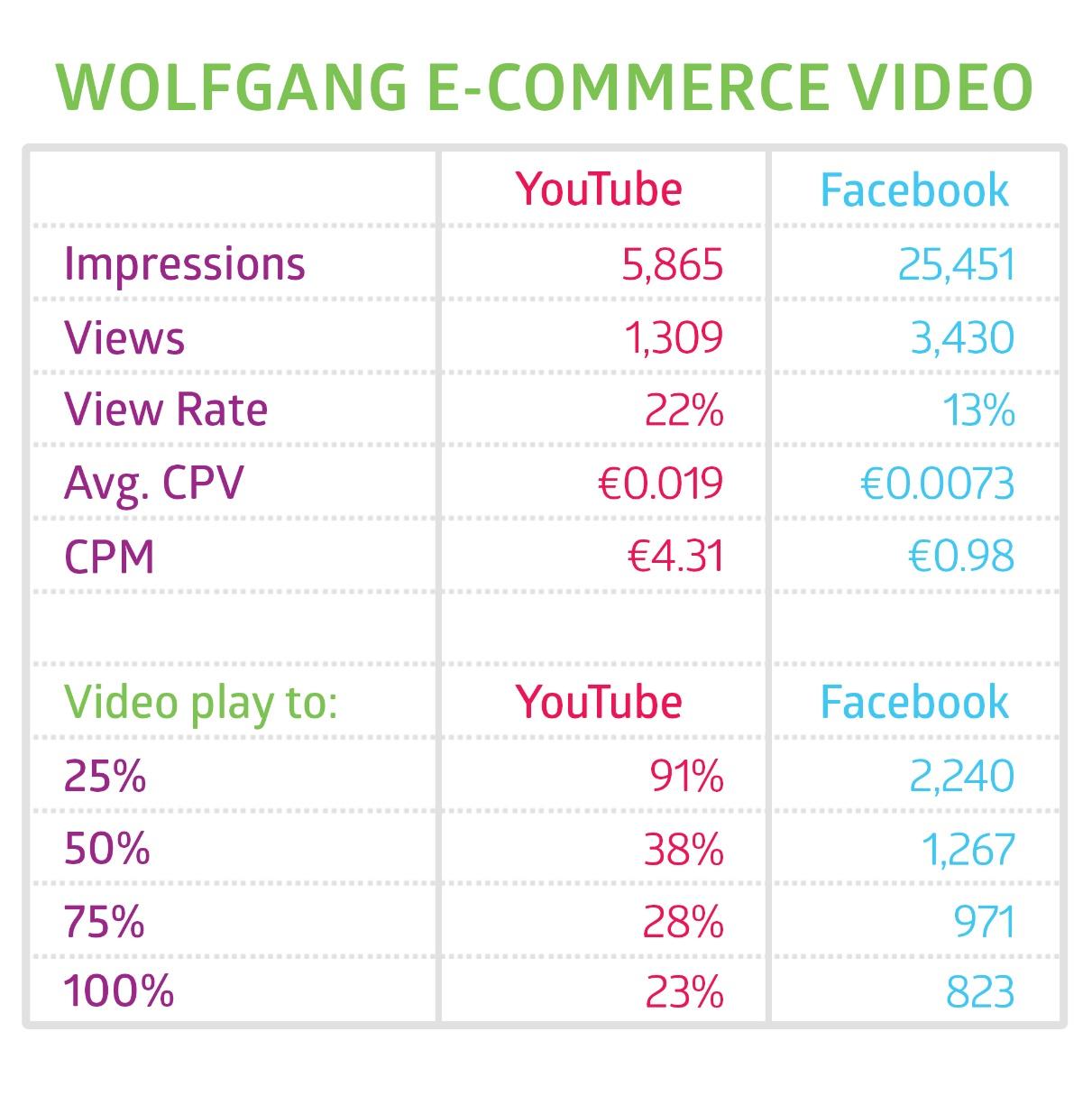 The rise and rise of online video content over recent years is showing no signs of slowing. According to Cisco Forecast, video will represent 69% of all consumer-based Internet traffic by 2017; this is expected to rise to 80% by 2019.

Meanwhile, another study from Business Insider estimates that video advertising will account for 41% of total desktop display-related spending in 2020 in the US.

Looking at these stats, it’s clear that video will continue to be a critical element of successful digital marketing strategies for the foreseeable future. As YouTube and Facebook jostle to be top dog in online video, our team of digital marketing scientists at Wolfgang Digital naturally wanted to run an experiment to determine which platform delivers the best value when promoting video content and, importantly, how much quality watched time you get for your investment on each advertising platform.

Let’s analyze the numbers and try to settle the “Facebook vs YouTube” video battle once and for all!

Here’s how the battle for video has been shaping up over recent years.

So, where can you get the best value for your video advertising budget?

Our experiment ran the numbers — including impressions, overall time watched, and quality time watched — to find out.

For this experiment, we advertised the same 20-second-long video over the same period of time and with identical budgets via YouTube ads and Facebook Video ads. We also targeted the same type of individuals using demographics and interest-based targeting.

The first hurdle to overcome was that each platform has different methods for counting views and charging for advertising.

In YouTube advertising, you’re charged per view. A YouTube “view” is counted after 30 seconds (or the full duration of the video, if it’s shorter than 30 seconds) or when a user engages with your video.

Facebook, on the other hand, charges by cost per 1,000 impressions (CPM) and a “view” is counted after just 3 seconds. Facebook also displays the Cost Per View by dividing the total spend of the campaign by the views.

How to calculate overall watched time

Despite the fact that both YouTube and Facebook have begun referring to “hours watched” as a statement of their performance, this metric is not easily accessible to advertisers. At the time of posting, neither the AdWords nor the Facebook interface give you a number for the exact amount of time watched.

In the AdWords interface, you can find the “quartile report,” which shows you the percentage of your audience that viewed certain percentage runtimes of your video (25%, 50%, 75%, and 100%). For instance, in the table below, 91% of total viewers watched up to 25% of the video. In Facebook, you can find a similar report, but instead of showing you percentages it shows you the number of views per percentile. So according to the table below, there were 2,240 views of up to 25% of the video.

What this meant for our experiment was that in order to estimate the overall watched time on each channel, we had to use different techniques based on this table and utilize YouTube Analytics.

1. First of all, forget about the AdWords interface and go to YouTube Analytics. 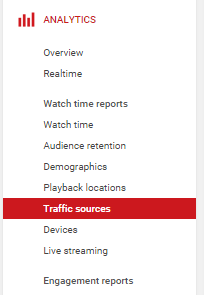 2. Click “Traffic sources,” then select the video you want to measure, the timeline you used when you promoted it, and finally, filter your data by traffic source by selecting “YouTube Advertising.”

3. Once you have done that — voilà! You now have overall watched time without having to break out the calculator.

*Please bear in mind that there can be a slight variation between the data in YouTube Analytics and the data in the AdWords interface.

Facebook displays video views per percentage of the video watched. In order to estimate the overall watched time, you need to:

1. Get the difference between the views in each percentile (to avoid double-counting). A viewer that has watched 100% of the video has watched 75%, as well.

2. Multiply that difference in views by the watched time in that percentile.

3. Also, don’t forget to count the views (more than 3 seconds) that haven’t reached the 25% mark of the video.

The problem with this technique is that you could over- or under-count the time watched, since each percentile varies by almost 5 seconds. For this reason, we are taking the midpoint of each percentile to estimate the overall watched time.

As we previously mentioned, we compared the results between both channels by focusing on the following metrics: impressions, overall watched time, and quality time watched.

When we compared the same promoted video on both platforms, we noticed that the number of impressions on Facebook was 334% higher than on YouTube. This is because the cost per 1,000 impressions (CPM) is considerably cheaper on Facebook. YouTube CPM stands at €4.31 whereas Facebook CPM is €0.98.

When promoting a video on Facebook, you could get 3 times more impressions for your budget. However, since autoplay could be activated on users’ devices, every impression could potentially count as at least 1 or 2 seconds for Facebook’s overall watched time count.

If Facebook counts those autoplay seconds from the impression as a part of their overall watched time, then that could explain why Facebook Video is growing so quickly. By charging a more competitive CPM, Facebook is maximizing its overall reach. As a result, the watched time increases, too. 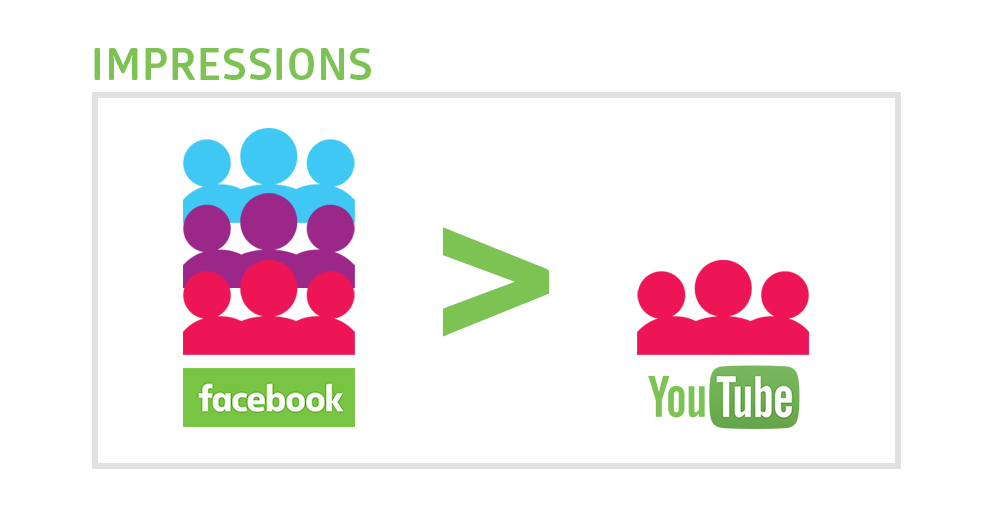 So, how did the two platforms fare in terms of overall watched time?

Since neither the Facebook nor the AdWords interface displays an exact time metric, we’ve taken the midpoint of each percentile to estimate the overall watched time.

For example, for our 20-second video, a view in the 25% percentile could include anywhere between the range of 5 to 9.9 seconds. Since there’s no way to determine the exact time, the midpoint in this percentile would be 7.45 seconds. We have also taken autoplay into account for both channels.

Our results showed that overall watched time was higher on Facebook (19.9 hours, including autoplay time) than on YouTube (17.7 hours).

Does the overall watched time affect the cost? No. In fact, this metric gives you visibility on all the additional watched time you are getting for “free.” Since we’re only paying for full views on YouTube (7hrs), we could see that there were about 10 hours of watched video coming from non-complete views that we didn’t have to pay for.

The big question is: How is Facebook counting the overall watched time? If it’s considering more than “views” in its calculation, that could represent almost 20 hours of watched time. On the other hand, if it’s taking only views (more than 3 seconds) into account, that could cut the watched time in half to 9.6 hours!

So for Facebook, if you’re reporting on cost per view, any time watched below 3 seconds is essentially free of charge. 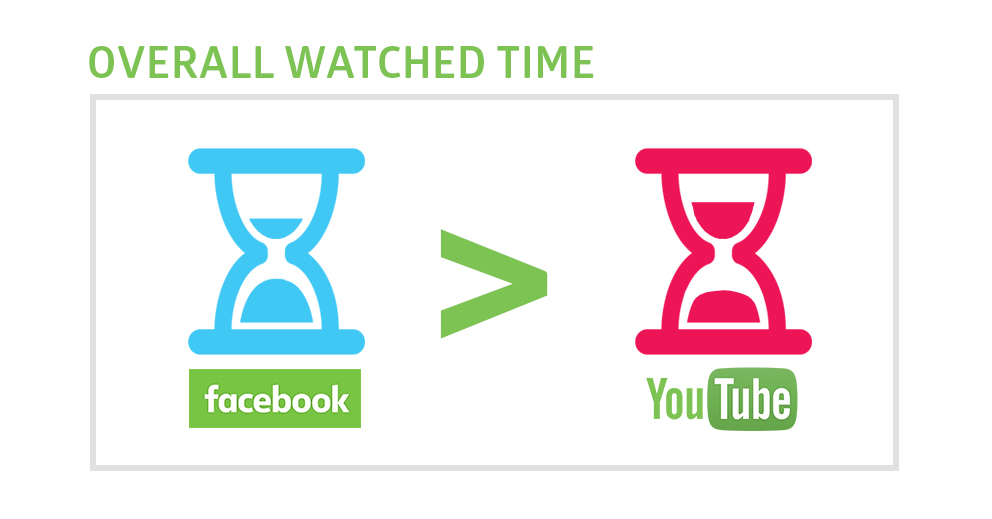 Watched time could be a really impressive metric for these video giants and their epic battle, but digital advertisers and their clients should be more concerned about “quality watched time.”

Since our video is only 20 seconds long and the CTA is at the end of the video, we considered a complete view as quality watched time.

*Please bear in mind that these are time approximations, since YouTube also counts a view if the user is engaged (e.g. if the user clicks on the video). Moreover, a full view in Facebook is counted not only when your video is viewed to 100% of its length, but also if the user skips to this point. 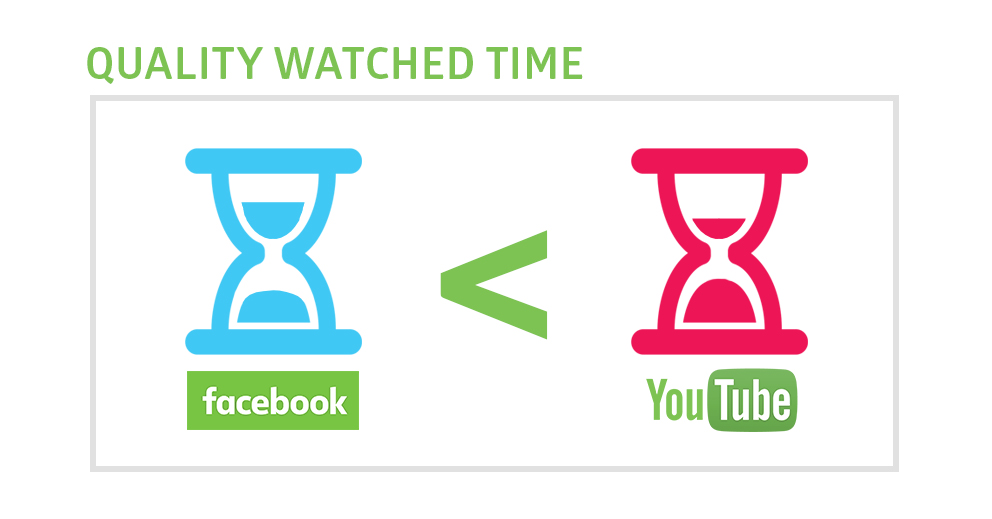 Well, that depends on your KPIs. If you want to put your video in front of as many people as possible, you may opt for using Facebook, whereas if you want to pay for quality watched time, YouTube may be a better option. We highly recommend using both channels in order to expand your reach.

*Overall time watched is an approximation. Since there isn’t an exact way to measure watched time. The results may vary depending of the quality of your video, length and target audience.

Do you use both channels? How do you measure video success?