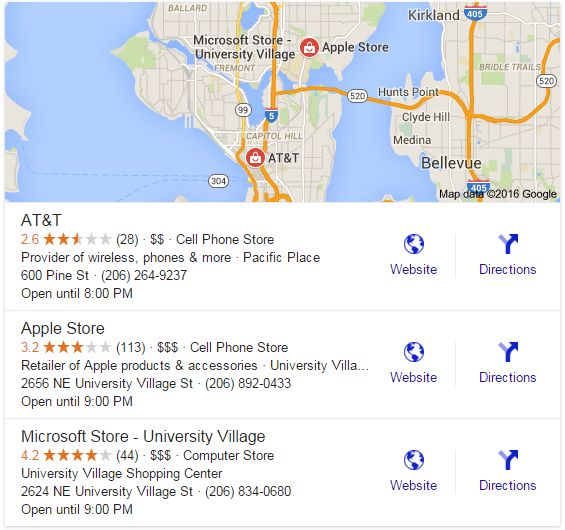 Summary: We analyzed 5 mobile phone buyer searches on Google across 5,000 cities (25,000 total markets) to find the winners and losers in both organic and local pack results. Best Buy dominated organic results and performed well in local searches. Sprint won the local pack results, but disappeared from organic entirely. Carriers Verizon, T-Mobile, and AT&T all performed well, but none covered more than 30% of local search markets.

The wireless industry in the United States is both massive and competitive. According to an IDC report, over 184 million mobile phones were shipped to US customers in 2014, with an estimated 191 million in 2015. The vast majority of consumers, even in 2015, report browsing products online but purchasing in-store (73%, according to PWC’s annual report). This trend may be even more dramatic in the wireless industry, where experts suggest that upwards of 9 out of 10 of all mobile phone purchases in the US still happen in a brick-and-mortar store.

In a competitive environment where most people research phones online but buy them in-store, ranking well in Google search results, especially local results, is critical. Local results can lead consumers not only to one brand over another, but to specific store locations in their area, surfacing store addresses, phone numbers, and operating hours.

For example, here’s a local 3-pack from a search for “mobile phone store” in the Seattle area:

Local packs in 2016 not only contain rich information, including directions, reviews, location, phone, and store hours, but they appear at or near the top of organic results and occupy a large amount of screen real-estate.

This report takes a Google’s-eye view of the mobile phone market in the United States. We ran thousands of searches to determine who were the big winners in both organic and local Google results, who were the losers, and where big brands had gaps.

For this study, we tracked 5 wireless industry phrases on page 1 of Google.com across the 5,000 largest cities in the contiguous 48 states (according to census data), measuring both organic and local pack results. The five searches used in the final study were:

Finally, we threw out “phone shop,” because, even searching US locations on Google.com, that phrase tended to return UK-based results. Data was combined across the five keywords, with organic and local results analyzed separately.

If we treat each of these 25,000 searches (5 keywords X 5,000 cities) as a potential market, we can get a sense of how well any given company is covering the total US marketplace. For this analysis, we’ll treat multiple listings on a single page of search results as one “market.” The question is just whether any given brand is represented in that market (not where or how often).

Here were the top 5 brands, by total markets:

Surprisingly, Sprint was nowhere to be found in our organic data, showing just one listing (and that one was on a sub-domain). Keep in mind that this study looked only at page-one results. Used phone resellers, including Gazelle (#11), Glyde (#12), and Swappa (#16) made a strong showing in the top 20.

The “market” analysis doesn’t account for the varying impact of different ranking positions and the populations of the 5,000 cities in this study. So, we did a second, more complex analysis. If we take a shallow click-through curve (see below), where the #1 position gets the most clicks and then click-through rate (CTR) trails off, and then we multiply each of those CTRs by the city’s population, we can get a proxy for total click volume.

Obviously, not everyone alive is running these searches, and we’re going to cheat and assume clicks total 100% (they don’t, in reality), so instead of looking at total counts, we’ll rely on percentage of total click share. Here were the top 5 by click share:

Adjusting for CTR and population, Best Buy held onto the top spot, and most of the top 5 was the same. The notable exception was AT&T, which fell to #8. Digging deeper into the data, this appears to be a function of CTR. On average, AT&T’s rankings are appearing lower on page 1 than the rest of the top 5. Cricket Wireless moved up from #8 to round out the top 5.

Now, let’s look at just the local pack results for those same 25,000 markets. Keep in mind that local packs did not occur in all markets, and there are a maximum of 3 sites in any local pack (compared with up to 10 organic listings). Here were the top 5 local winners:

Sprint, nowhere to be seen in our organic data, led the pack in local results. Other major wireless companies rounded out the top 5. Best Buy maintained a strong position at #6, but organic leader Newegg.com fell completely out of the local results, having no physical storefronts.

Clearly, the biggest disconnect between the organic and local data here was Sprint — taking the #1 spot for local, but disappearing completely from organic rankings. Newegg flipped that around, dominating organic but having no local presence. This was a direct and obvious result of having no physical locations.

Another big difference between organic and local was Apple.com. Apple naturally has a strong presence for product-specific (i.e. iPhone) queries, but ranked #47 in our organic results for general phone-buying searches, appearing in only 95 (of 25,000) markets. Apple stores, however, ranked #8 in local markets.

Other than some position shuffling, the Top 5 were the same as the simpler local-pack analysis. T-Mobile took the top spot from Sprint when adjusted by CTR and population. It looks as if the major brands were distributed pretty well across a variety of populations and ranking positions.

What if we combine the organic and local totals, using the click share data across all markets? Here are the winners of the combined data:

Verizon and Best Buy were in close competition for the top spot, with T-Mobile just behind. Best Buy’s #6 spot in our local analysis was easily boosted by their #1 spot in organic, making the big box store a strong overall contender. AT&T squeaked into the top 5, hampered a bit by their #8 position in organic search. Cricket Wireless rounded out the top 5.

Best Buy dominated our organic winners and took an impressive #2 overall, performing well in local searches. This matches Best Buy’s leading spot in real-world mobile phone sales, an advantage enhanced by representing multiple brands and carriers under one roof. Best Buy’s performance is even more impressive given that they have considerably fewer total locations than most of the major carriers.

Sprint was the biggest winner in local results, given their relatively small retail footprint compared to other major carriers. Publicly-reported location data shows Sprint having half or less of the locations that each of Verizon, T-Mobile, and AT&T operate, which makes their local dominance even more impressive. Sprint’s recent acquisition of as many as 1,700 Radio Shack storefronts could double their retail locations and make them a force to be reckoned with in local search. Sprint does, however, need to address their complete absence from organic results for general mobile keywords.

Mega-carriers Verizon, T-Mobile, and AT&T performed well in overall results, as expected given their marketing budgets and massive retail footprints. Verizon struggled somewhat in local rankings, relative to other carriers, bolstered in the overall standings by their strong organic presence. AT&T had the opposite problem — they had a strong local presence, but trailed a bit in organic once CTR was taken into account. It appears AT&T has room for improvement in their ranking positions for general mobile phone terms.

AT&T can count a second win in their column. As of 2014, they own Cricket Wireless, who was our #4 overall winner and had a top 5 position in both of our click share analyses (organic and local). Cricket’s dominant position is undoubtedly good for revenue, although it can be argued that both their organic and local search share represent a branding challenge for AT&T.

No single major carrier dominated market coverage in local pack results. Of the 25,000 markets we studied, 21,143 displayed local packs. Sprint ranked in local packs in about 1/3 of available markets, AT&T and T-Mobile ranked in just under 30%, and Verizon ranked in roughly 20%. Given their retail footprints and marketing budgets, all of the major carriers have significant room for improvement in their local rankings.

Even as the competitive landscape in the wireless industry shifts, Google’s local search landscape will continue to evolve. Google’s current local 3-packs have only been in full effect since August of 2015, and the search giant is constantly experimenting with new formats and features. No one carrier or reseller dominates the entire picture, and all of them will have to fight hard for organic and local search share in the foreseeable future.